COIL was an experimental music group formed in England in 1982 by Jhonn Balance with his partner/collaborator Peter Christopherson joining soon thereafter. COIL remains one of the most influential and best-known “industrial” bands, though with both main members of the group having now passed away (Jhonn from an alcohol-related fall in 2004, and Peter dying peacefully in his sleep in 2010).

Over the past couple of years I have created a variety of COIL-related items, and continue to find COIL a notable inspiration in my creative work (their methods and philosophy more than any similarities in actual output), with many framed works of mine finished whilst using their sounds as an “atmos” soundtrack, mostly accompanied by incense, candles and wine during nocturnal flourishes of activity in my countryside studio.

The Golden Age of Bloodsports
Compiled by Phil Barrington

A book collated and curated by myself of Jhonn Balance’s creative writing, lyrics and other COIL tracks, with additional photography created for this project.

“For the first time ever the large majority of the writings, lyrics and performed songs of Jhonn Balance are collected in one book. Famous for leading the british band COIL into uncharted musical, magickal and psychical territories until his tragic death in 2004, Balance was a cultural pioneer who blended the occult with heartfelt emotional outpouring, experimental sound with medieval sensibility and and electronic avant-garde.

An artist, lyricist, essayist, visionary, performance artist and inspiration to a great many leftfield creatives before his death and possibly the most mysterious, traumatic and obsessive character in recent popular culture history after his passing, this book identifies key lyrical themes embedded within his vision.

From a tumultuous childhood nurturing occult promises of escape, to long chemical journeys into the wooded wilderness of moonscapes, vegetation and displeased rabbits, Balance’s world is undeniably unique.

A potent tableau of wordplay, rhythm, repetition, nature, astronomy, magick, sex, high emotion and psychedelic surrealism are all part of his writing, perfectly mirroring the ways that COIL uniquely assembled their recorded sounds, though there are other strong qualities uncovered here in this book.”

Note; Since the re-release of COIL singles* from autumn 2015 onwards, an updated 4th Edition of this book to include newly-unearthed lyrics was released on November 19th 2017.

* The first set of 8 COIL CD re-releases in 2015 did not have inserts/tracklistings with them, so I made some inserts for them here (rar file of 8 x pdf sleeves). 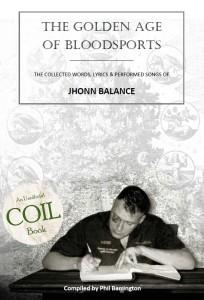 The Golden Age of Bloodsports

Promo video of sold out printed edition, on Youtube Here

Photoshoot and Sample Pages of the Book

The continuing online editions of the book are unauthorised collections of Jhonn Balance’s words and ideas, salvaging and piecing together scraps of words/lyrics from all other unofficial (and official) sources, together with a little private research and transcriptions, into one coherent and respectful tome. Please refer to the various credits and copyright notices within.

Called various things over time by COIL themselves (including “Wounded Galaxies Tap at the Window”), this free album is my unofficial fan-creation of COIL’s aborted album from the mid-1990s featuring a host of famous writers, performance poets and musicians that COIL recorded, or recorded with, but whom abandoned the project soon after. This collection includes, with permission, a very rare collaborative demo of the mid-1990s era from the legendary Scanner (aka Robin Rimbaud).

I stress again; This is an unauthorised fan creation including mixed and edited sounds from COIL with some use of stock and found sounds too. 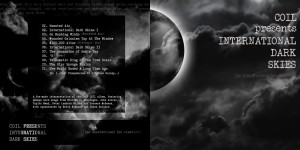 Or download the 138mb zip of mp3 files from here.

A fan-film I made for a track on the above “International Dark Skies” album;

A series of experiments I made to create drug-less hallucinations based around a variety of COIL sleeve artwork, with two films here and more found on my Youtube channel.

My combination of elements from two COIL tracks, with further sounds from a live performance.

Q. What is it?
A. It’s a simple mix of the instrumental studio backing track for the live favourite ‘CSLTE’, with Jhonn Balance’s vocal tracks from ‘Tunnel of Goats’ mixed into it.

Q. Is that it?
A. The last five minutes of this mix is gatecrashed by the great finale of the USA live version of ‘CSLTE’, with Jhonn’s presence felt at odd times throughout this long track, along with very minor instrumental portions of the ‘Tunnel of Goats’ track/s to help fill out the sound of the backing track from the original CSO boxset reconstruction disk.

I’ve always loved COIL’s “Constant Shallowness Leads to Evil” album, especially the intense live interpretations they did of certain tracks of it, along with their own live-only album amalgamation called “Constant Shallowness Leads to Evil”. Well, we may not have the definitive studio version of that track, but I designed this mix to remedy that for my ears. 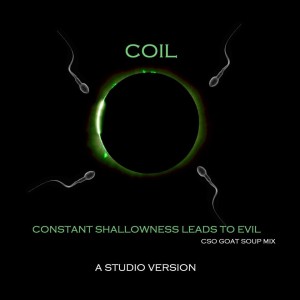 This mix is released taking note of the CSO Creative Commons License, all source materials by COIL.

My fan-made COIL promo video of their “Constant Shallowness Leads to Evil” album track (though the featured track edit is exclusive to this video).

Additional video footage shot at the COIL ex-studio/residence in Weston-super-Mare, western England, during my visit there in December 2017.

Jump over to my Instagram account and you’ll find me there talking about my other various COIL projects…
www.instagram.com/philbarrington

The following gallery contains COIL-related imagery I have created under the following themes:

Spoof/faux toy figure posters of the various members of COIL across different eras of the band’s history. All trademark imagery used for obvious spoof purposes.

Bad fonts mixed with stock imagery and head-scratching quotations? It must be these COIL Anti-Positivity Memes… Dumbfound your friends and followers. Confuse your relatives. Covertly connect with fellow COIL fans. For a tiny bit of COIL-related fun, this is my celebration of the surreal world and humour of Mr. Jhonn Balance.

A growing selection of pop-culture essays and reviews that I’ve written on a random assortment of topics over the years. These pieces may contain adult material.

“How Dark is Darkness?“
Marco Malattia, “No Vaseline“, digital expression of sexuality and the evolution of transgression art on film. An essay by Phil Barrington (Dec 2013).

“Mr. Witkin, I Presume”
An account of meeting Joel-Peter Witkin in Paris by Phil Barrington (Nov 2007).